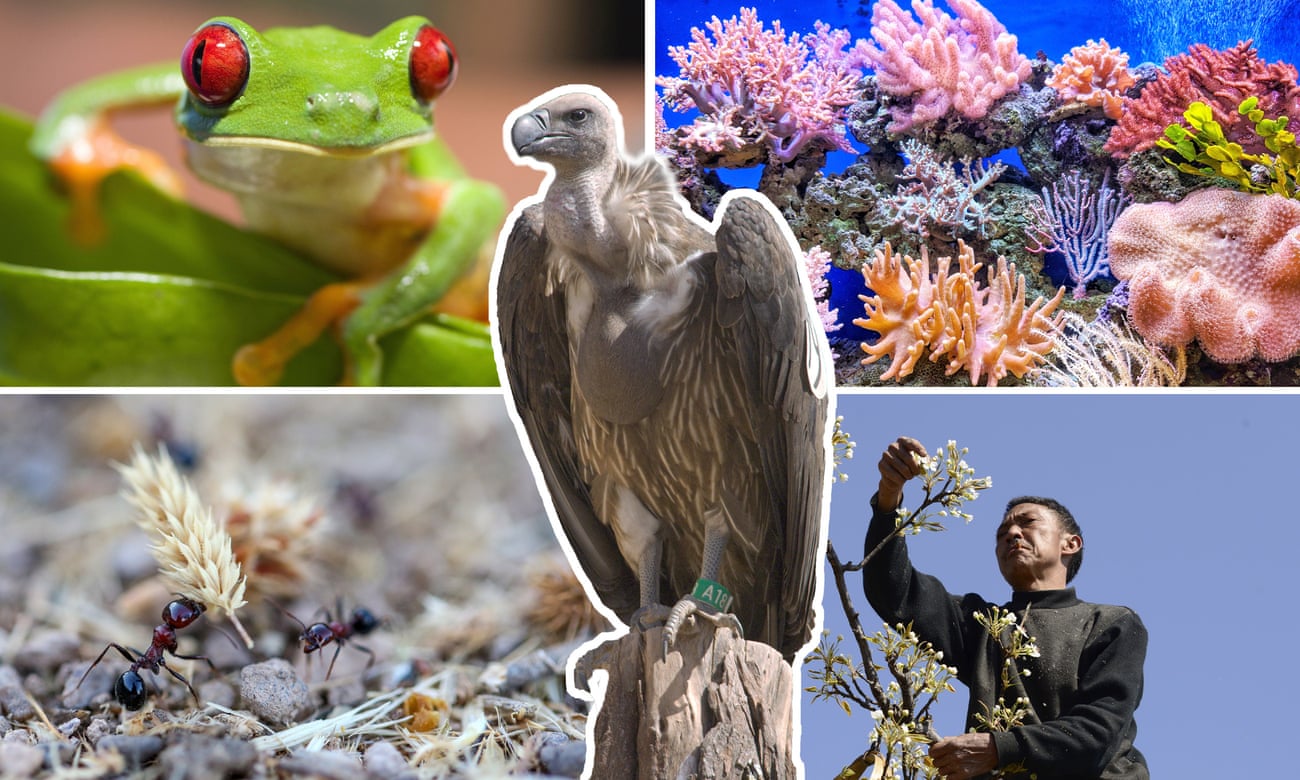 What happens when humans meddle with nature?

1. As Indian vultures decline, the number of rabies cases rise

In the early 1990s, vultures across India started dying inexplicably. Long-billed, slender-billed and oriental white-backed vultures declined to the brink of extinction, with the number of India’s most common three vulture species falling by more than 97% between 1992 and 2007. Six other species were in sharp decline too. Scientists started testing the dead birds and discovered they had been exposed to diclofenac, an anti-inflammatory drug routinely given to cattle in south Asia at the time. The vultures fed on the carcasses of cows and were poisoned.

That was the beginning of a far-reaching chain reaction. As vulture populations crashed, cow carcasses started to pile up, and the number of rats and wild dogs surged. Dogs became the main scavengers at dumps previously used by vultures. Data suggests that from 1992 to 2003, dogs increased by 7 million. The number of dog bites soared, and rabies infections shot up, causing tens of thousands of people to die yearly. In 2006, diclofenac was banned, and vulture populations have slowly recovered.

In the late 1950s, China’s leader, Mao Zedong, wanted to industrialise the country through the Great Leap Forward rapidly. That involved the “four pests campaign”, targeting mosquitoes, rats, flies – and sparrows. He ordered all the country’s sparrows to be killed because he thought they were feeding on rice and grains and reducing the amount available for people. Citizens were told to shoot the birds, tear down their nests, smash their eggs and bang pots so they would be scared into the sky and fall to their deaths, exhausted. Sparrows were nearly driven to extinction in China.

Mao’s officials didn’t realise that sparrows rely on grains for only a small part of their diet: the bulk of it comprises insects. After the mass killing, insect pests erupted, which destroyed the country’s crops. “This ecological catastrophe, coupled with a multi-year drought and disastrous agricultural policies led to one of the most devastating famines in history. It is estimated that about 45 million people died,” says Prof Marc Cadotte, an ecologist at the University of Toronto.

A deadly chytrid fungus called Batrachochytrium dendrobatidis (Bd) ripped through Panama and Costa Rica from the 1980s to the mid-1990s, leading to the extinction of dozens of species of amphibians, with some scientists putting the number at 90. It was described as “the greatest loss of biodiversity attributable to a disease”, but most people would have been unaware of the tragedy.

After the deaths, there was an eight-year spike in malaria cases in Central America, as mosquitoes thrived, probably because there were no frogs, salamanders, and other amphibians to prey on their eggs, researchers reported recently. At its peak there was a fivefold increase in malaria cases.

“If we allow massive ecosystem disruptions to happen, it can substantially impact human health in ways that are difficult to predict ahead of time and hard to control once they’re underway,” says Michael Springborn, a professor at the University of California, Davis, and lead author of the paper.

In 2004, an Indian Ocean earthquake and tsunami killed more than 230,000 people. The countries worst hit were Indonesia, Sri Lanka, India and Thailand, all of which had experienced significant declines in mangrove cover, according to a report by the Environmental Justice Foundation. From 1980 to 2000, the area covered by mangroves in these countries fell by 28%. In places where the trees had been destroyed, the waves penetrated further inland, killing more people and aggravating the destruction of homes and livelihoods. The “mangrove forests played a crucial role in saving human lives and property”, the report said.

Mangroves absorb the impact of waves and rising sea levels by their large root systems, which dissipate energy. “Conserving and restoring coastal mangrove areas is essential if coastal communities are to recover and be protected from similar events,” the report concluded.

5. As bees disappear, fruit trees in China are hand-pollinated

In Sichuan province, south-west China, the widespread use of pesticides alongside habitat destruction means that farmers have to carry pots of pollen to pollinate pear and apple trees themselves, according to Dave Goulson, professor of biology at the University of Sussex. This means using a paintbrush attached to a long bamboo pole to dab inside each flower. According to one study, about 30% of China’s pear trees are artificially pollinated.

Pollinating insects are vital to human food security – three-quarters of crops depend on them. They are also crucial to other wildlife as a food source and as pollinators of wild plants. But a lack of wild pollinators is affecting food production around the world. In the US, researchers studied seven crops grown in 13 states and found that five showed evidence that a lack of bees affects the amount of food that can be grown, including apples, blueberries and cherries.

Since the second world war, our main defence against crop pests has been artificial pesticides. But these chemicals also kill helpful insects, including parasitoid wasps, lacewings and ladybirds, which hunt common pests and support farmers and gardeners.

Researchers in Brazil have found that ants can be more effective than pesticides at helping farmers produce food because they are better at killing pests, reducing plant damage and increasing yields. This is because they are “generalist” predators, hunting pests that damage fruit, seeds and leaves. The scientists looked at the impact of 26 species of ants (mainly tree ants) on 17 crops, including citrus, mango, apple and soy. According to the paper published in Proceedings of the Royal Society B, they do best in diversified farming systems, such as agroforestry and shade-grown crops, because there are more places to nest.

Like mangroves, coral reefs are a natural barrier to waves and storms. Because of their hard, jagged formations, they can protect coastal communities and reduce the threat of erosion. They make it more likely for waves to break off-shore, reducing wave energy by an average of 97% by the time they hit land. It is estimated that nearly 200 million people in coastal areas worldwide depend on protecting coral reefs. Research shows that in the US, they provide more than $1.8bn annually in flood protection benefits.

However, developments such as marinas and docks, as well as pollution, the damage these reefs. The corals are also being destroyed by rising temperatures, which lead to mass bleaching. Research suggests that virtually all corals on the planet will suffer from severe bleaching if global temperatures rise by 1.5C.