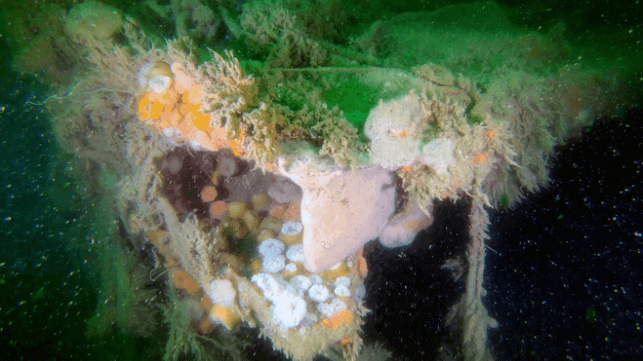 The remnants of sunken World War II warships continue to influence marine ecosystems in the North Sea even after sitting on the seabed for more than eight decades, a new study shows.

Researchers from Ghent University closely studied the repurposed trawler John Mahn (V-1302), which was appropriated by the German Navy in WWII and used as a patrol boat. The study found that the wreck and its dangerous cargo – including depth charges – continue to impact the surrounding marine environment.

The 292-tonne ship sank to the bottom of the North Sea in 1942 during Operation Cerberus (better known to history as the Channel Dash). While anchored to provide air defense cover for high-value German warships, the John Mahn was attacked by six Royal Air Force Hawker Hurricanes. Two aerial bombs struck her despite successfully downing one of the aircraft. The first bomb hit the funnel amidships and detonated in the boiler room, while the second hit the stern and destroyed the propeller shaft tunnel. The ship sank rapidly, killing 11 sailors.

The vast North Sea conceals a unique landscape of historical wreck sites from both World War I and II, and the John Mahn is just one of the hundreds of lost vessels that litter the seabed today. The EU-supported North Sea Wrecks project investigates warship remnants and their hazardous cargoes to understand the potential risks.

In their study – titled “80 years later: Marine sediments still influenced by an old warship” – a team of Ghent University researchers were able to determine that even after almost 80 years on the seafloor, the remnants of John Mahn continue to influence the marine environment in the Belgian part of the North Sea.

Sample research on the wreck and its environs established that hazardous pollutants had seeped into the ship's seafloor, with the strongest concentration of the toxic remnants occurring closest to the wreck. The samples contained evidence of polycyclic aromatic hydrocarbons, chemicals associated with crude oil, coal and gasoline, and various heavy metals and explosive compounds.

The study demonstrated that the wreck still influences the local microbiology and geochemistry on and around the warship. Both bacteria and microalgae are responsive to the chemistry and structure the shipwreck provides on a highly localized level.

Although there are an estimated 35 wrecks in the Belgian part of the North Sea that may still contain munitions, the researchers selected the John Mahn shipwreck for the study based on the known presence of pollutants in the form of coal bunkers and depth charges – as well as the site's favorable conditions for diving.

The scope of the potential impact extends far beyond the site of the John Mahn. It is estimated that World War I and II shipwrecks around the globe collectively contain 2.5 million to 20.4 million tonnes of petroleum products.

“While wrecks can function as artificial reefs and have tremendous human story-telling value, we should not forget that they can be dangerous, human-made objects unintentionally introduced into a natural environment,” co-author Josefien Van Landuyt told Metro. “Today, new shipwrecks are removed for this exact reason.”