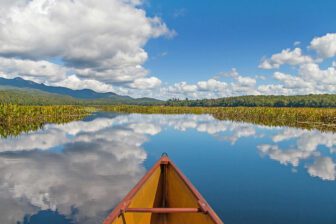 (NCPR) – When you go to cast your ballot in this year’s midterm election, remember to flip it over. On the back, you’ll see Proposition 1, which asks New Yorkers whether the state should borrow $4.2 billion for environmental projects.

If approved, that money would be spent in the coming decades on reducing flood risks, mitigating the effects of climate change, and preserving the land around the state.

Extreme weather events like Hurricane Sandy and Irene have pummeled New York State in recent decades, and temperatures are rising. New York is not immune to the effects of climate change.

But Peter Bauer, the executive director of Protect the Adirondacks, says New York can become a leader and even a haven in the face of climate change.

Green groups like Protect the Adirondacks, the Adirondack Council, the Nature Conservancy and Environmental Advocates of New York are all urging New Yorkers to vote yes to approve the 4.2 billion dollars environmental bond act.

If it passes, the money will be doled out to communities across the state– $1.5 billion to build green infrastructure and cooling centers. Another $1.1 billion would be used to restore waterways and reduce flood risks. There’s $650 million for water infrastructure projects and another $650 million for land preservation, which Bauer says is critical.

“Every year, the developed part of New York State gets bigger and bigger, the amount of land that’s under asphalt grows year after year,” Bauer says, “so protecting land is doing a favor for future generations.”

But not everyone feels that way. Brian Wells, the supervisor of Hamilton County and town supervisor of Indian Lake, says Adirondack towns like his struggle to grow and prosper because of how much surrounding land the state already owns. Think about Indian Lake as a pie chart, Wells says.

“Every time the state buys something and increases the Forest Preserve or somebody donates it, or it’s endowed, or a land trust purchases it, it just makes that pie much smaller and much harder for us,” says Wells.

Wells thinks the state should focus on managing its land, like building and maintaining trails and hiring more forest rangers.

While he’s grateful for the millions in state funding that Indian Lake and other Adirondack towns get for things like new water treatment plants, Wells says adding $4.2 billion to the state’s debt doesn’t make financial sense, and he plans to vote against the bond act.

Dan Stec, a Republican state senator representing a big portion of the Adirondacks, has also expressed concern about the bond act.

“I have my doubts whether or not it’s going to make a difference or if it’s just going to check some boxes for people to feel good about saying they support the environment,” Stec said in a recent debate with his Democratic challenger, Jean Lapper.