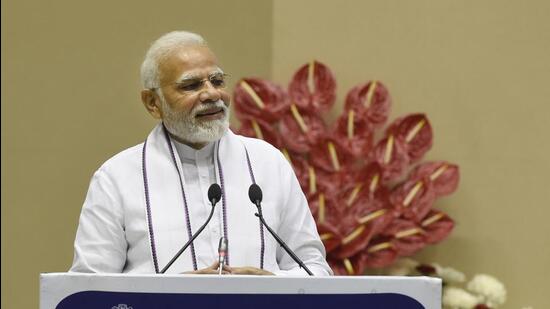 The National Conference of Environment Ministers aims to create further synergy between the central and state governments on the environment, forests and climate change.

Prime Minister Narendra Modi will inaugurate the National Conference of Environment Ministers in Ekta Nagar, Gujarat, on Friday and discuss climate change, prohibition on single-use plastics, lifestyle for the environment, and other policies, the government said on Wednesday.

“The conference is being convened to create further synergy among the central and state governments in formulating better policies on issues such as elimination of plastic pollution through a multi-pronged approach and state action plan to effectively combat climate change with a focus on LiFE- Lifestyle for Environment. It will also focus on increasing the forest cover with special emphasis on restoration of degraded land and wildlife conservation,” a statement from the union environment ministry said.

The two-day conference is being organised on September 23 and 24 and will have six thematic sessions with topics focusing on LiFE, Combating climate change (updating state action plans on climate change for mitigation of emissions and adaptation to climate impacts); PARIVESH (Single Window System for Integrated Green Clearances); Forestry Management; Prevention and Control of Pollution; Wildlife Management; Plastics and Waste Management among others, the statement added.

One of the main points of discussion will be the new format of the Parivesh website used by user agencies like industries and mining companies to apply for various clearances, including forest, wildlife, coastal and environmental clearance.

“According to the announcement made in the Union Budget 2022-2023, PARIVESH, with the expanded scope, is at an advanced stage of trial and preparation,” the ministry said.

“Several key functionalities like Common Application Form (CAF), GIS driven know your Approval (KYA) & Decision support system (DSS), compliance modules and such other features are being included for transparent, scientific and expeditious appraisal of the project proposals while ensuring adherence to environmental safeguards,” it added.

Parivesh website is also proposed to be seamlessly integrated with the GatiShakti portal to facilitate understanding of the project proposals from environmental, forest, wildlife and CRZ clearances which may be involved in such projects.

HT reported on Wednesday that the environment ministry has started overhauling the process of considering and granting forest clearance to make the process consistent with Forest Conservation Rules 2022 and to issue clearances for forest diversion to various infrastructure or mining projects in a time-bound manner.

Get Latest Indian News along with Latest News and Top Headlines from India and around the world.