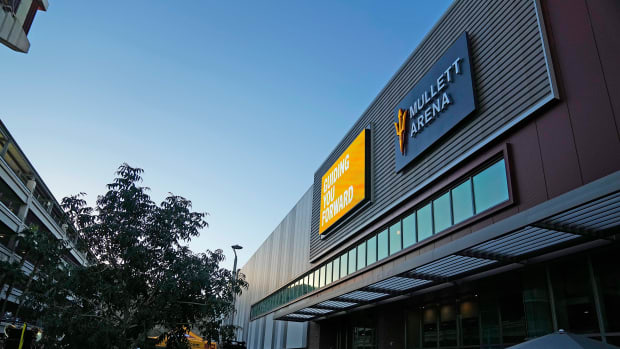 As the Arizona Coyotes make their home debut at Mullett Arena, we caught up with Peter Luukko, the Oak View Group co-chair, and Gary Green of BBB Architects.

Green, a former NHL coach with the Washington Capitals and a longtime broadcaster, is now a senior director and consultant with BBB, which designed Mullett Arena.

The 5,000-seat Mullett Arena will be home for the Coyotes for at least the next three seasons as a temporary solution, while the city of Tempe is expected to vote on a proposal for a new arena on Nov. 29.

Construction finished on Mullett Arena in time for the Arizona State Sun Devils to play four games to kick off the season. At centre ice, ASU’s iconic fork is left of the red line, while the Kachina Coyote sits on the right.

Despite the smaller capacity, fans attending the games can expect a great atmosphere after those first four NCAA games, said Luukko.

“It’s going to be a lot of fun – the environment’s incredible,” Luukko said to The Hockey News. “It’s loud and exciting. We have got some of the best food and beverages you’ll get.”

Green said it was a group effort to design and build the arena and spoke about Coyotes games' expectations.

“What you’re going to see on opening night here for the Coyotes is a jam-packed, exciting, intimate crowd that is going to be treated the way they would if they were in a 17,000- or 20,000-seat NHL facility,” Green said.

The Arizona Coyotes will play at their new home for four games before embarking on a 14-game road trip.