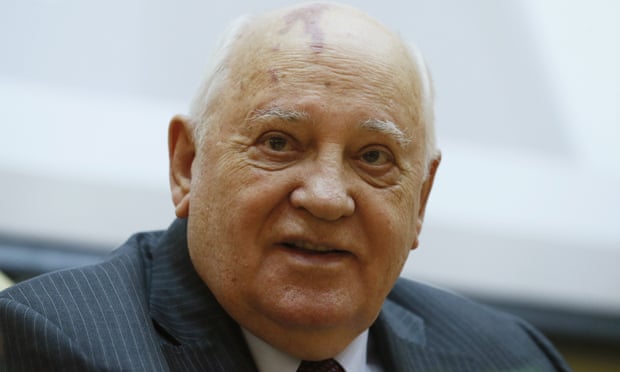 Mikhail Gorbachev's commitment to the environment was ahead of its time

After stepping down as Soviet leader, he devoted himself to ‘the most urgent task facing humanity today

When Mikhail Gorbachev introduced reforms permitting greater freedom of speech in the 1980s, one of the first things Soviet citizens began to speak out about was their anger over the pollution spewed out by the country's biggest and oldest factories.

It prompted his administration to shut down 1,300 of the most polluting factories, he said in an interview with US National Public Radio in 2000. Still, it also helped crystallise a commitment to environmental causes that put him well ahead of his time and made him an outlier among other former global leaders.

“This is a problem that cannot be postponed. So I think the environmental problem will be the number one item on the agenda of the 21st century,” he said in the same interview. “If we just hope that we'll make it somehow, that nature will cope with these problems somehow through its resources, and we can just do what we've been doing, we could face an even graver situation.”

Most of the international tributes to Gorbachev have focused on his liberalisation and reform agenda, perestroika, glasnost, and his role in ending the cold war and the collapse of the Soviet Union. Still, his work promoting environmental causes after he stepped down as president of the Soviet Union is also significant for its prescience.

Two years after his resignation, he set up Green Cross International, a foundation that he hoped would gain the status of the Red Cross, focusing on environmental rather than humanitarian crises (the crossover between the two was less well established). It was set up to address everything from climate change to the chemical contamination left by weapons of mass destruction.

Many fellow global leaders were puzzled by his preoccupation with the issue, according to Adam Koniuszewski, who was the non-profit's director from 2008 until 2017. “He brought a level of urgency to questions of environmental degradation and climate change, questions that many world leaders still do not take seriously enough. Many were wondering how is it that such a serious statesperson – someone credited with having had perhaps the biggest impact on global affairs in recent times – could be so interested in environmental questions?” he said.

Within Russia, where Gorbachev was viewed less warmly than he was in the west, there was some scepticism about his environmental campaigns. Shortly after its launch, reporters asked him about his role in the initial cover-up of the Chornobyl disaster and about why he had not done more to stop the dumping of used Soviet nuclear reactors and radioactive materials into the sea when he had the power to do so.

But those who worked closely with him said the experience of Chornobyl was partly what motivated his commitment to the cause. “It impacted him as the kind of industrial disaster that has consequences across borders very quickly, as the cloud spread. He realised environmental problems don't stop at the border and require international cooperation,” Koniuszewski said. His childhood experience of losing two sisters and an uncle to famine prompted by Stalin's collectivisation programme in the 1930s also shaped his concerns about human-made environmental disasters.

“I am convinced that this is the most urgent task facing humanity today,” Gorbachev wrote in 2006.

Tony Juniper, the former vice-chair of Friends of the Earth International, said Gorbachev was highlighting the importance of taking immediate action on climate 30 years ago when other world leaders viewed the environment as a “future challenge rather than an issue that needed to be dealt with immediately. He made strong links with questions of poverty and security. There was a lot of foresight in what he did.”

The international environment minister, Zac Goldsmith, tweeted this week: “Mikhail Gorbachev was a good and wise man, with immense courage and a true passion for the environment. I was privileged to meet him 20 years ago when I was awarded the Gorbachev prize for my environmental work. He was a giant.”

Primatologist and ecological activist Jane Goodall met Gorbachev on several occasions to discuss the environment. “I admired him for having that commitment to the environment when many leaders didn't seem to care,” she said. “He was unequivocal on the interrelationship between poverty and sustainability. He understood the importance of alleviating poverty so well that you may destroy the environment to survive when you're poor.”

In the 1990s and 2000s, Gorbachev brought together film stars like Leonardo DiCaprio and Robert Redford, CNN founder Ted Turner, scientists and UN leaders to sit on the organisation's board. Still, its influence has waned since he stepped down, without ever achieving the global recognition of the Red Cross.

But the organisation had a tangible impact on awareness raising and facilitating the destruction of chemical weapon stockpiles. “His greatness lies in that he saw and understood the greatest challenges of our times ahead of most other world leaders, if not all of them. I think that's quite something,” Koniuszewski said.