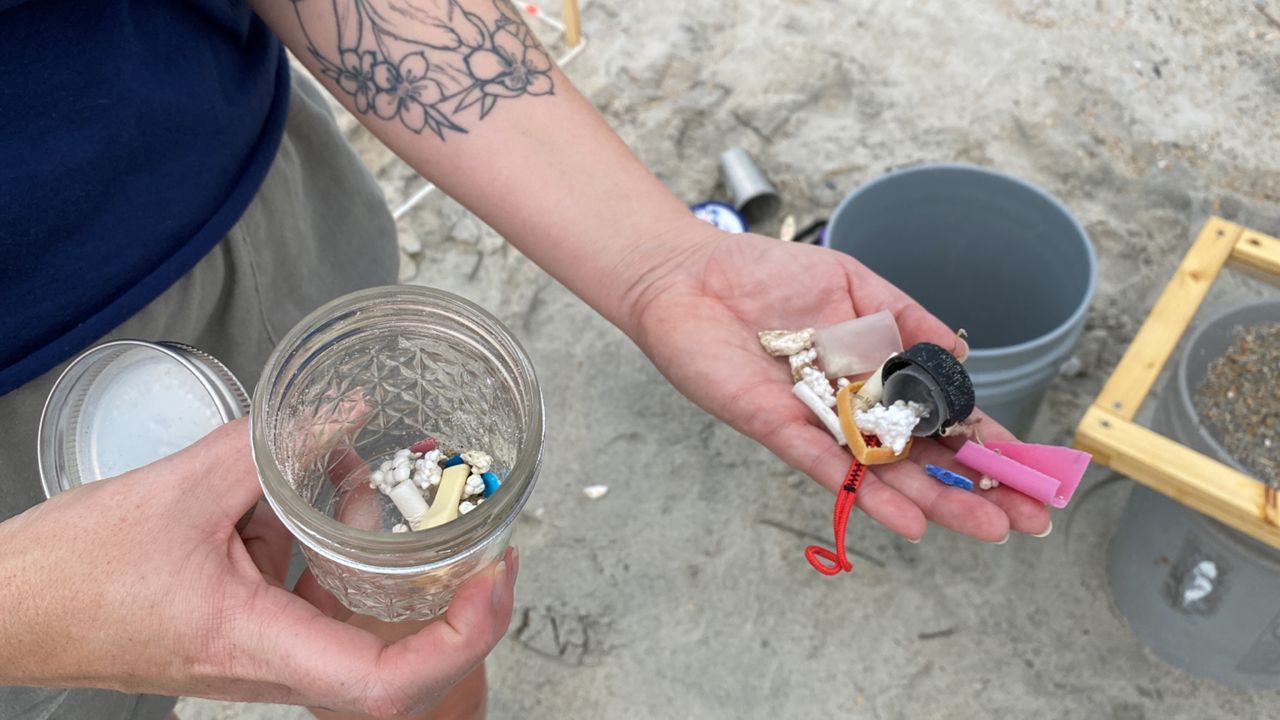 WRIGHTSVILLE BEACH, N.C. — Once a week, David Cignotti marks out a square meter of sand on the beach, right at the high-tide line. Using a sieve and two buckets, he carefully filters through the top layer of sand searching for microplastics, tiny pieces of plastic 5 millimeters or smaller.

Cignotti, the former mayor of Wrightsville Beach, is one of about 30 volunteers working with the North Carolina Coastal Federation to measure how much plastic is washing up on the beach in the southeastern corner of the state.

“One of the problems with polystyrene: It doesn’t biodegrade for a hundred years, and it’s light and it blows everywhere. It’s with us every time the wind blows and when the tide comes up,” Cignotti said, standing off Beach Access 31, his designated territory for the project.

What You Need To Know

In North Carolina, the Coastal Federation has volunteers measuring plastics in Brunswick, New Hanover and Pender counties, from the South Carolina state line up to the top of Topsail Island north of Wilmington.

Georgia Busch, with the North Carolina Coastal Federation, shows some of what volunteers find while sifting sand in search of plastics. (Spectrum News 1/Charles Duncan)

“What we’re interested in with this sampling effort is looking for microplastics. So that would be plastic fragments, lines, foam pieces, pellets, something that might have been a piece of a film at some point,” said Georgia Busch, who runs the team of citizen scientists with the Coastal Federation.

“All of those different characterized pieces of plastic that have broken down find their way into the sand, embedded in the habitat essentially, create a much longer-lasting, much harder-to-solve problem,” she said.

Polystyrene, also known as styrofoam, is commonly used to make things like egg cartons and coolers. It’s also used to make floating docks, a common site in the inlets and waterways around Wrightsville Beach and every other coastal community.

The plastic makes for good flotation for the docks, but when a big storm comes through like Hurricane Florence, those docks can get broken up and all that debris ends up in the water.

Georgia Busch, who runs the team of citizen scientists with the Coastal Federation, said those destroyed docks are a big contributor to plastic debris in the waterways and on the beach.

Earlier this year, each of the three towns on Topsail Island passed laws banning new floating docks with exposed styrofoam. They can still use polystyrene, but it has to be contained in a hard plastic shell or something similar.

Busch said the Coastal Federal helped each of those three towns, Topsail Beach, Surf City and North Topsail Beach, draft those new ordinances. She said they’ve focused their efforts on getting local governments to pass these ordinances for their communities.

Wrightsville Beach is also thinking about doing its own ordinance, said Cignotti, the former mayor.

“If Wrightsville Beach passes its own ordinances, and Topsail Beach’s is successful, you’ll probably have more municipalities join in,” he said.

It does cost more to have a floating dock with hard plastic encapsulating the styrofoam, Busch said, but the docks also last longer when the polystyrene isn’t exposed to the elements and boat traffic.

Another problem, Cignotti said, is that dock owners don’t have a time frame for when they’re required to clean up a dock that gets destroyed in a hurricane.

“After Florence, they sat for a year with exposed polystyrene breaking up and going into the marsh,” he said. “It’s the public’s water for all of us.”

The work Cignotti is doing as a volunteer for the Coastal Federation follows a national protocol developed by the Environmental Protection Agency. It’s the same methods used to sample and study microplastics in waterways around the United States, Busch said.

Microplastics are not a new problem, but groups like the Coastal Federal say they’re trying to figure out policy solutions to make it better in the future, or at least not let it get worse.

“I don’t know how you clean it up. I think you have to prevent it,” Cignotti said.