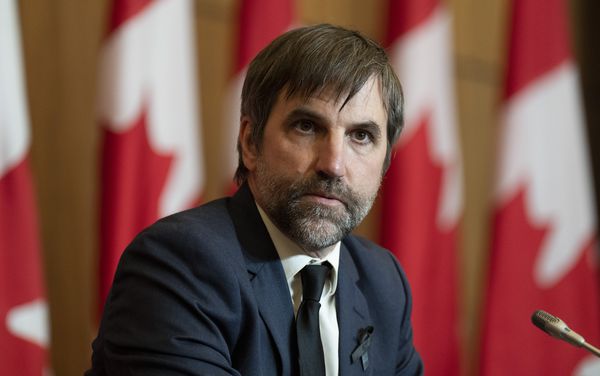 Canada’s Environment Minister said he sees at least one advantage of using an emissions cap over a pricing system to bring down the oil and gas industry’s burgeoning greenhouse gas output.

In an interview on Monday with The Globe and Mail at the COP27 climate conference in Egypt, Steven Guilbeault, who has been Minister of Environment and Climate Change for a year, said, “one of the advantages of a cap is emissions reduction certainty.” That is, a cap would allow the government to predict with some degree of accuracy that Canada’s emissions targets would be met.

Canada is struggling to reduce its carbon output by at least 40 per cent by 2030 and achieve net-zero emissions by 2050. The government wants the oil and gas industry to cut its emissions by 42 per cent from 2019′s levels by 2030.

A modified carbon pricing system is the alternative to a cap.

Mr. Guilbeault insisted no decision has been made on which route the government will take, although he acknowledged the “predictability” of emissions reductions as a benefit of a cap system. After a long consultation period, he expects a decision to be made by the spring, with regulations to be put in place by the end of 2023.

Prime Minister Justin Trudeau, who was a no-show at COP27, had promised some emissions cap during his 2021 election campaign.

Opinion: How China could play the climate disaster loss and damage game to its geopolitical advantage

Canada’s oil and gas industry, dominated by the Alberta oil sands, is responsible for slightly more than a quarter of all emissions. Mr Guilbeault has criticized the industry for raking in the record or near-record profits as energy prices rise while devoting relatively small amounts of that lavish income to carbon reduction.

“I find this somewhat puzzling and aggravating simultaneously,” he told The Globe. “Canada can not do our fair share internationally if they don’t reduce their emissions.”

A price cap would be part of a cap-and-trade system that would apply specifically to the oil and gas industry.

The industry’s emissions would be divided into allowances allocated to individual companies. As the emissions cap is tightened, companies that fail to reduce their emissions fast enough would have to buy credits from rivals that had more success in bringing down their carbon output.

The pricing option would encourage emissions reductions by modifying, perhaps boosting, the levy on carbon output. In April, the government set the tax at $50 per tonne of carbon dioxide. It is to rise to $65 next year and is set to reach $170 in 2030.

Once again, Canada has come under pressure to cut its emissions as fears intensify that the Paris Agreement goal of limiting global average temperature increases to 1.5 C over preindustrial levels will not be met. Average temperatures have climbed 1.1 C as global emissions continue to rise.

On Monday, the new edition of the Climate Change Performance Index placed Canada in the 58th spot among the 63 countries on the list, though that was up from 61st last year. Only Russia, South Korea, Kazakhstan, Saudi Arabia and Iran ranked lower. The index is a blended ranking that measures factors such as emissions, energy use, renewable energy rollout and climate policy.

In a statement, the CCPI, designed by the Germanwatch environmental group, said that Canada’s output reduction trajectory is “not 1.5 C compatible and must be considerably strengthened.” It was also critical of Canada’s intentions to keep boosting its oil, gas and coal production.

While acknowledging Canada has a lot of work to do to meet its legally binding net-zero commitment, Mr Guilbeault said the country’s methane reduction plan worked well; regulated output reductions are happening quickly. The goal is a 40 per cent to 45 per cent reduction in methane emissions by 2025 and 75 per cent by 2030, making it one of the most ambitious targets in the world.

“I suspect we will get there sooner than 2025 by the looks of it,” he said. “I think Saskatchewan is almost there, and Alberta is not too far away.”

Methane reductions globally are a key part of the battle to keep the 1.5 C goal alive since the gas is about 25 times more potent than carbon dioxide in trapping heat in the atmosphere.

Speaking at a climate event on Wednesday, John Kerry, the U.S. Special Presidential Envoy for Climate, said he has been trying to work with China on methane reductions. But he said relations with China are strained because House Speaker Nancy Pelosi visits Taiwan in August. He said China called off a “major negotiating session” ahead of COP27 because of her visit.

Mr. Guilbeault said Canada supports discussions to design a “loss and damage” fund but appeared to hold out little hope that the fund’s architecture would make much progress by the time COP27 ends on Nov. 18.

The fund would pay for reparations triggered by catastrophic climate events, such as the floods that inundated Pakistan earlier this year. The fund would recognize that carbon emissions from rich, industrialized countries are largely responsible for causing such damage – and make them pay for it.

“It can’t be about liability,” he said. “I can’t put Canadians on the hook for tens of billions of potential damages in the developing world.”

Other ministers and leaders from wealthy countries have said the same. Mr Guilbeault, however, said discussions need to be held about the design, implementation and financing of any loss and damage fund, such as whether it should come from the public, private or international financial institutions such as the World Bank.