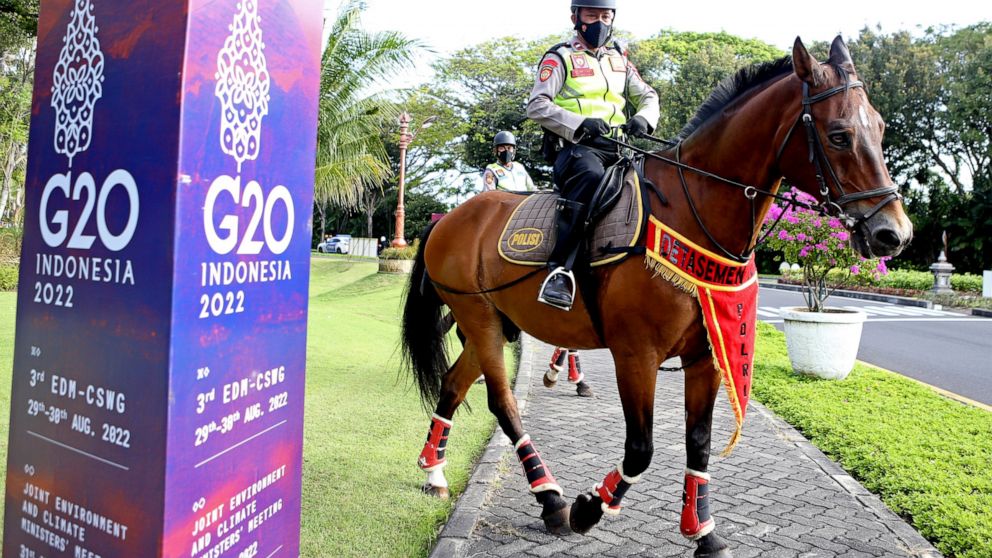 NUSA DUA, Indonesia — Environment officials from the Group of 20 leading rich and developing nations are gathering Wednesday on Indonesia’s resort island of Bali for talks to spur global climate action and other troubles that have worsened due to the war in Ukraine.

Implementing each G-20 nation's contribution and synchronizing targets among developing and developed countries will be discussed in the closed-door meetings, Indonesia’s environment minister Siti Nurbaya said before the one-day meeting.

She expected the meeting to produce a joint agreement with three priority issues — sustainable recovery, land-based and ocean-based climate action, and resource mobilization — to realise the Paris Agreement, the first universal and legally binding commitment to climate change.

Nurbaya opened the meeting by urging fellow environment ministers to safeguard environmental multilateralism and to make it work, as it is the only way to coordinate efforts to tackle global challenges effectively.

“Environmental multilateralism is the only mechanism where all countries, regardless of their size and wealth, stand on equal footing and treatment,” Nurbaya said. “The voices of all countries, North and South, developed and developing, must be heard.”

Indonesia, the holder of this year’s G-20 presidency, ratified the Paris Agreement in 2016. The country is committed to reducing emissions by 41% with international assistance by 2030, or by 29% independently.

U.S. climate envoy John Kerry was among 17 environment ministers and climate officials, in addition to over 200 delegates attending the talks in person. In addition, top officials from China, Russia and Argentina joined the meeting virtually.

In their closed-door meetings, the environment ministers are seeking ways to increase efforts to control climate change and prevent a 1.5 degree Celsius rise in global temperatures in line with the Paris Agreement and also searching for commitments from developed countries to fulfil their climate pledges and climate financing for developing countries.

In his speech, Italy's climate envoy Alessandro Modiano said the war had grave consequences on the environment, food and energy security, the pandemic recovery efforts, and the pursuit of sustainable development goals.

“I must therefore stress that my government consider it crucial to have in this final text a clear language that reflects the unjustifiable and unprovoked Russia war of aggression against Ukraine,” Modiano said.

Those apparent commitments may be tested as the G-20 environment ministers meet in the heavily-guarded Nusa Dua tourist haven to lay the groundwork for the leader's meeting in November in Bali, the primarily Hindu “island of the gods” in the majority Muslim archipelago nation.

Southeast Asia’s largest economy is a crucial exporter of coal, palm oil and minerals amid a global commodity shortage after Russia invaded Ukraine. Coal exports increased in March after a temporary shipment ban early this year to secure domestic supplies.

Members of the G-20 account for about 80% of the world’s economic output, two-thirds of the world’s population and an estimated 80% of global greenhouse gas emissions.